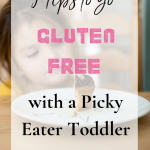 Going gluten free at any stage of life isn’t easy, especially not in a world filled with baked goods and pizza. It is especially difficult to go gluten free with a toddler who doesn’t understand why he can’t eat certain things. And it’s even more difficult when that toddler is an incredibly picky eater.

We’ve been on the gluten free journey with our oldest for nearly 3 years now and it’s been a learning experience. Hopefully some of the tips and tricks we’ve learned along the way will help you if you’re facing the daunting task of cutting gluten out of your small child’s life.

Our journey to Gluten Free

When my oldest, Liam, was about 2 years old we started to notice that he would often have a rash around his mouth and whenever the rash would pop up he would be crankier than usual. It took us a while to figure out that the rash and the crankiness were diet related. At age 3 we finally brought it up with our pediatrician who ran an allergy panel on him.

Lo and behold, he has a gluten intolerance. He doesn’t have celiac and the symptoms that accompany that. But he has a high enough intolerance that whenever he has gluten he breaks out in a rash on his face and his tummy hurts. (It took until he was verbal enough to tell us that his stomach hurt for us to realize that the cranky behavior was because he had a stomach ache and didn’t feel good)

So we decided to cut gluten out of his diet. Minor problem. He was (and still is) an extremely picky eater who adores his carbs.

His favorite foods at the time were Goldfish crackers and pancakes. He had rarely met a carb he didn’t like (takes after his momma). So the trick was going to be going gluten free with a child small enough that he didn’t understand why he couldn’t have that cookie at a party.

Liam is now nearly 6 and we are almost 3 years into this gluten-free journey with him. We’ve learned some tricks and hacks along the way that I want to pass along to any mommas out there who are facing the seemingly daunting task of switching over to a gluten-free diet with their kiddo.

Disclaimer: We have only had to deal with an intolerance and not life-threatening food allergies so some of this advice isn’t applicable if your child has a major food allergy.

1. Get the family/support system on board

Going gluten-free with your child is going to be approximately 1000% easier if every person in his life is on the same page. There are so many adults in your child’s life who are in charge of giving him/her a snack, preparing meals or spoiling him/her with a treat.

If you are constantly fighting an uphill battle with others then it’s going to be that much more difficult for your child to understand the change in diet.

We have several family members who either don’t understand what gluten is or don’t think it’s necessary for him to be on a gluten-free diet (“just one cookie won’t hurt him” ) It can be really easy to let these people get to you and make you feel like you are “bad cop” limiting what your child can and can’t eat. These people also aren’t going to be the ones dealing with your child later when they’re crying because their stomach hurts or throwing tantrums because they don’t feel good (or whatever way your child’s allergy or intolerance manifests itself)

Do your best to educate the people in your life on what gluten is, why your child is now gluten free and what he can and can’t eat.

An easy rule of thumb for us has been- if it explicitly says gluten free on the package he can have it, if it doesn’t it has to be looked at and approved by mom or dad first.

So you already know your kiddo is a picky eater, otherwise you wouldn’t be reading this. So it’s probably not wise to suddenly try and make your child a wheatgrass smoothie loving kiddo (I mean….unless that’s what they’re into)

Stick with what they know and find an alternative.

A dietary change is already hard enough. You don’t need to tackle their picky eating while also completely changing their diet or you’re going to stress both them and you out. Make the switch to gluten free and then come back around and tackle the picky eating and trying to introduce new foods a little later.

Bread is usually a pretty big staple and is one of the hardest things to make the switch on that a) won’t cost an arm and a leg and b) your kid will actually eat.

Two budget friendly, PB&J tested breads that both my kids love are:

Aldi’s Live Gfree brand- available in both white and multigrain options. It usually runs about $3.99 per loaf at my local Aldi (but prices vary depending on location so check your local store) It tastes just like “real” bread and is one of the most budget friendly options I’ve yet to find

Costco’s Promise brand- only comes in a multigrain option so it’s best for kiddos who are fine with little flecks of seeds in their bread (some picky eaters aren’t down for all that nonsense) It is $5.99 for a 2 pack (again, prices vary depending on location) This is the cheapest gluten free bread I have found and my kids eat it several times a week.

Gluten-free options are becoming more and more common these days. But they are often geared more toward adults than children (ex. gluten free menu has salmon with a side salad) Do your research before leaving home.

If we are going to a restaurant I always pull up the menu online and check it out before we go. If the allergens aren’t clearly marked or if there isn’t a gluten-free menu available, give the restaurant a call to double check.

This is particularly important if your child has celiac disease because cross-contamination is rampant in restaurants. Some restaurants are only “gluten friendly” not gluten-free, meaning they don’t have a dedicated space to prepare gluten-free foods and so there is a risk of the food being exposed to gluten.

Try to choose restaurants where you have at least one gluten-free option that you know your child will like. If all else fails, pack a simple meal and bring it with you. Most restaurants won’t say anything if you’re discreet about bringing your own food in, especially when they see that it’s for a child.

4. pack snacks and gf alternatives when you’re out

When you’re out and about make sure you pack some gluten free snacks and/or alternatives. Usually these are hard to come by in a pinch and it just makes your life easier if you are already prepared.

If you know you’re going somewhere that cookies are going to be offered pack a gluten-free cookie option so your child doesn’t feel left out.

It’s always a good rule of thumb to have snacks on you at all times, regardless of whether your child is gluten-free. Because a hangry kid is no fun. But it’s even more important for our gluten-free kiddos because we can’t easily just pop in somewhere and get them something to munch on.

When you are switching a toddler over to a new diet it’s often really hard for them to understand why they have to eat differently than their peers. To a 3 year old a cookie is a cookie.

We have always explained to Liam why he can’t have certain foods and how they will make him feel if he eats them. It really helps that we often have an alternative for him.

For example- At a birthday party he often wants the birthday cake everyone else is having. I always bring our own slice of gf cake or a gf cupcake with me to parties. I make sure as the cake is being passed out that I have his cake ready and I tell him “That cake isn’t gluten free and it will make your tummy hurt. But that’s ok, because momma brought you your very own piece of cake. This one is gluten-free and it will make your tummy feel happy. Plus it is your own special piece, just for you”

At Halloween and other candy centric holidays we use the Flip Flop Swap to switch out non-gluten free candy for gluten free options like these.

I make sure to explain why he can’t have the other cake, offer a really good alternative and explain in really simple terms why he has his own special piece. 9 times out of 10 he is a-ok with the switch and since we’ve practiced consistency with this it has just become his normal.

I know that making a major dietary change with your small child can seem like a daunting task but I hope these tips/hacks help a bit. There are so many more gluten free options today than there were even 5 years ago.

Remember that no major changes happened overnight. Start by making gradual switches. Read all labels and educate yourself on the options that are out there.

This may seem daunting at first but I promise if you take it step by step, day by day this is a manageable change. You’ve got this momma!

Are there any gluten free tips I missed? What has been the most helpful trick on your journey to going gluten free with your kiddo?

This site uses Akismet to reduce spam. Learn how your comment data is processed.

Hi there! I'm Chelsea. I am passionate about empowering moms to build a life they love. You are strong and capable of more than you know. Learn more about how I strive to live each day intentionally and build all the DIY projects along the way.
Want to know more about me?

What Can I Help You Find

Join our newsletter and get your FREE Intentional Living Daily Planner

Chelsea Builds is a participant in the Amazon Services LLC Associates Program, an affiliate advertising program designed to provide a means for sites to earn fees by linking to Amazon.com and affiliated sites.
All information found on ChelseaBuilds.com is intended for informational and educational purposes only. The information provided on this website is not intended to be a replacement or substitute for professional medical advice.

“The ground began to shake
The stone was ...

This season has been one of weeding and pruning ...

In case you were ever in need of a fancy YouTube ...

With everything going on life has definitely felt ...

87 3
Open
With everything going on life has definitely felt

It’s hard to believe these pictures were taken a...


Error: API requests are being delayed for this account. New posts will not be retrieved.